We had a taste of what it’s like to be famous. We spent some time in the little Spa Salon up near us, and we indulged in a manly pedicure, manicure and reflexology. Very relaxing except for the constant sound of a bike engine, warbling outside…oh wait, that’s Pascy…SNORING! Amazing, just like Nicholas Cage, he was gone in 60 seconds.

Later that night, the three of us walked along the beach from the Patra Bali Resort in Tuban (where Pascy’s family is staying), and into Kuta for dinner at a new place called The Stones Hotel and Entertainment Center. Totally amazing place, which has a nightclub and pool at the bottom, a world class restaurant, Salt Of The Earth, on the second floor, and a pool bar on the roof with five giant jacuzzis.

And we had the entire place to ourselves!

No kidding. There’s a big hotel out the back but it’s still under construction. I imagine once it’s finished, there’ll be thousands of people there, but tonight…ONLY THREE. 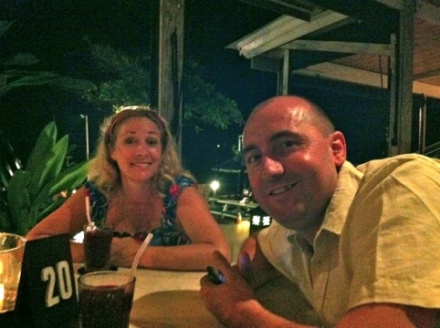 It was a little disappointing at first, we thought that perhaps it mustn’t be any good, but oh my god…maybe the best food I’ve ever had in all of Bali. And the desserts were definitely the highlight. You get two choices — Select three desserts…or select six desserts, um…for dessert. Naturally, we had to go with the six, and they bring out the most mouth watering desserts, but tiny mouthful size so you don’t end up too full.

Another highlight of course, was the bathrooms. Technologically advanced, the seat comes up and…lights up, as you open the door and begins to pre-heat the seat. A panel of buttons on the wall include functions such as front wash, rear wash, pulse, oscillate (my personal favourite), dry and a series of angle controls. I may never be the same again. The stall door also had a picture of a woman with her back to you on the front side and has her facing you on the inside. A little weird to have someone watching you while you’re running through the spin cycle. The women’s is the same but with different men on the doors.

And having the entire place to ourselves felt like we were rich, famous celebrities who rent out the entire building, just so they can have their tiny cake and eat it…without anyone in the world to bother them. Pretentious I know, but who cares, it was awesome 🙂